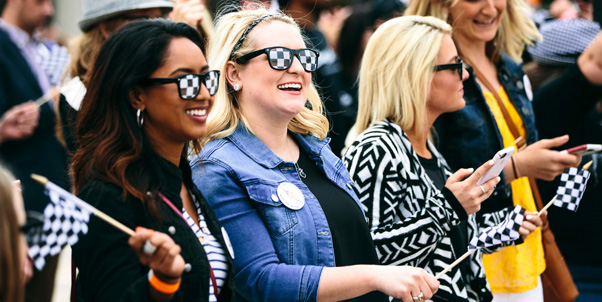 INDIANAPOLIS – Indianapolis 500 fans are encouraged to show their pride for the world’s greatest race every Friday in the celebratory Month of May 2017 by wearing black, white and checkers to work, school and leisure activities.

#500fashionfridays is part of a larger “500 Forward” plan, which also includes Indianapolis artists’ “Welcome Race Fans” illustrations to appear in downtown store windows in May; the second year of the Indianapolis 500 Porch Party program, which encourages fans to host themed Indy 500 events in their decorated homes; and the massive “Greatest City in Racing” graphic that was installed on the JW Marriott hotel in downtown Indianapolis.

“We want the whole community to rally around the Greatest Month in Racing,” said Allison Melangton, Hulman Motorsports senior vice president of events. “Participating in #500fashionfridays is a great way to get geared up for the Month of May, which is such an important part of the identity and culture of our region.”

#500fashionfridays also will include a stylish contest on social media. Participants who photograph themselves in their racing attire on May 5, 12 and 19 and post the images with the #500fashionfridays hashtag on Instagram, Twitter or Facebook can win prizes. On Mondays, Indianapolis Motor Speedway will announce the winner, which comes with tickets to the 101st Running of the Indianapolis 500, Miller Lite Carb Day, Indy 500 Snake Pit Presented by Coors Light or the Indianapolis 500 Victory Celebration.

Creating more buzz around #500fashionfridays, on May 5, 12 and 19, selfie backdrops are being placed in Circle Centre, The Fashion Mall at Keystone, Castleton Square and Greenwood Park Mall, Main Street in Speedway, Indiana, Indianapolis City Market, on Georgia Street in downtown Indianapolis and several other locations. The public is invited to snap their fashionable racing-inspired photos in front of the banners and post them on social media.

#500fashionfridays is a partnership between Downtown Indy and the Indianapolis Motor Speedway.

Visit IMS.com to purchase tickets for the 101st Indianapolis 500 Presented by PennGrade Motor Oil and for more information on the complete Month or May schedule at IMS.