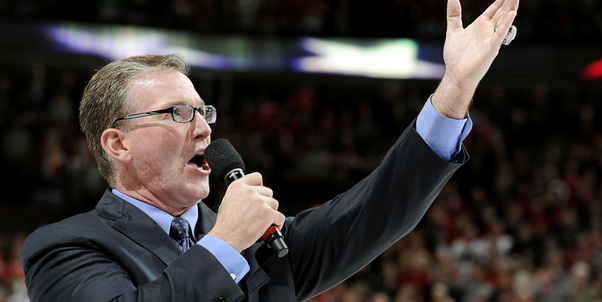 INDIANAPOLIS – Jim Cornelison, renowned for his stirring rendition of “The Star-Spangled Banner” at Chicago Blackhawks’ home games, will sing “Back Home Again In Indiana” before the start of the 101st Running of the Indianapolis 500 presented by PennGrade Motor Oil on Sunday, May 28 at the Indianapolis Motor Speedway.

Cornelison, a 1992 graduate of the Master of Music program at the Jacobs School of Music at Indiana University, has been the popular, exclusive singer of the national anthem before all Blackhawks’ home games at the United Center in Chicago since the 2008-09 season. His soaring vocals and spirited style have welcomed millions of network viewers to the Stanley Cup Finals over multiple championship runs for the Blackhawks’ organization.

“Jim Cornelison’s powerful tenor voice is one that most sports fans know and have heard in the United Center and on TV sets across the country,” IMS President J. Douglas Boles said. “We are thrilled to welcome him to IMS to perform the song that means so much to every Indianapolis 500 fan – whether they are from Indiana or otherwise – and we would like to thank the Blackhawks’ organization for working with us to allow Jim to be here for this most important pre-race tradition.”

The popularity of his powerful, respectful performances has led to Cornelison singing in front of national audiences at many other sporting events, including the 2012 Ryder Cup golf competition, Arlington Million horse race, Monster Energy NASCAR Cup Series race, ESPN’s “Friday Night Fights” and two USA Rugby matches, the first vs. New Zealand All Blacks and the second vs. Australia at Soldier Field. He’s also made television performances on “TODAY,” “The Colbert Report” and “Harry Connick Jr. Show.”

Cornelison’s widespread appreciation and popularity in Chicago is also evident on his resume. He has performed before games for every major Chicago professional sports team.

“I am thrilled to have the opportunity to come back to Indianapolis for the ‘500,’” said Cornelison. “What a blast! And to be asked to sing ‘Back Home Again In Indiana’ is a special treat and honor. Thanks to the team at the Indianapolis Motor Speedway for thinking of me. I can’t wait for Race Day!”

Cornelison, a tenor, sang with numerous opera companies before becoming one of six accepted apprentices from more than 800 applicants for the Lyric Opera’s Apprenticeship Program in Chicago in 1995.

He has performed nationally and internationally with some of the biggest names in opera, including Placido Domingo and Zubin Mehta, and with opera companies in the United States, United Kingdom, Belgium, France and many other locations.

Washington state native Cornelison has a strong commitment to the U.S. Armed Forces and to charitable organizations. He serves on the advisory board of the Illinois Patriot Education Fund, is the honorary squadron commander of the USAF Band of Mid-America and an honorary member of the World President’s Organization. He regularly participates with charitable organizations such as Dreams for Kids, the USO and veterans’ support groups.

Visit www.IMS.com to purchase tickets for the 101st Running of the Indianapolis 500 on Sunday, May 28, and for more information on the entire Month of May schedule at IMS. Kids 15 and under are free to all 2017 racing events at IMS when accompanied by an adult General Admission ticket-holder.